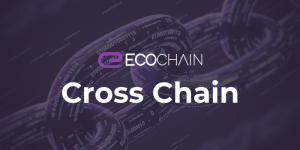 When blockchains were first being built, they were envisioned as being able to provide a ‘one size fits all’ solution, meaning that all transactions, smart contracts, or anything else is performed on a single chain. However, it’s clear now that such a system isn’t so practical, especially when there are scalability limits and innovation constraints.

Cross-chaining is the interoperability between two relatively independent blockchains. The other words, it allows blockchains to speak to one another because they’re built in a standardized way. Cross-chain implementation is mainly represented by asset swap and asset transfer, which are both important part of the blockchain world and a key research direction of ECOCHAIN. With cross-chaining the limitations of a single chain can be avoided.