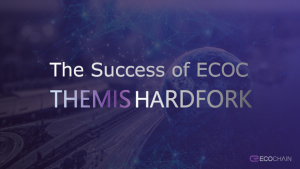 Themis Hard Fork brings a big change to block reward system. It makes the protocol more fair and financially more sound, as now coin inflating is under control. Themis Hard Fork was a request from our community and users. We actively listen our users and for that reason we decided to proceed.

The code has been written and the hard fork was successful on Ecochain testnet weeks ago. On September 15, at 22:29 (UTC time), Themis Hard Fork has been taken place at block height 870,000.  Hard fork has been carried out without problems. No accidental forks appeared. We conclude this from the following facts. First, we didn’t detect any bans or disconnections action from other peers from our wallet’s log files. Explorer also didn’t experience any problem, neither detected something unusual. Second, nothing has been reported and none requested our support, including exchanges, developers and users. Finally, and most importantly, the actual block time creation didn’t change at the time of hard fork. That means that the whole community followed the new line (upgraded their wallets). If not so, the network weight (total staking power) will be less than normal, which will impose a longer time for block creation (difficulty adjustment period). This did not happen, so we know for sure that all coin holders have upgraded their wallets prior the hard fork time and followed Themis.

If someone forgot to upgrade then he must install the new wallet, which is tagged at Github as v1.4.0.  They can download and install from the following hyperlink:

In some rare occasions maybe a reindex is needed for people who tried to stake with the old wallet. After installing the v1.4.0 (Themis) client, if a user can’t sync with the network, he is advised to backup his wallet and start the wallet under the “reindex” flag. To do that he can just double-click on the soft link described as “Ecochain (reindex). Check the following image: 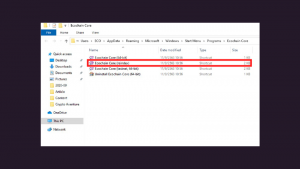 In most occasions, even for users who upgraded their wallets after the hard fork (block 870,000), reindexing is not necessary. The above action must be carried out only in case that the user won’t be able to sync with the network.

Themis was a great success because everyone followed. We are thankful to our communities, users and developers. If you have any further questions, you can reach us at our social media channels or email us directly.