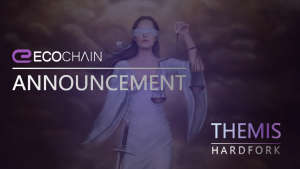 We have decided to make a hard fork for ECOCHAIN. A hard fork is something serious; it can’t be taken lightly. For this reason, we must first explain the necessity of this action.

Let’s go back to basics. How blockchain started, and what was its initial purpose? We know that the creator was Satoshi Nakamoto. His motivation was clear:

“The root problem with conventional currency is all the trust that’s required to make it work.” – Satoshi Nakamoto, 2009

What does the above mean? It merely means that until now, the people need to strengthen trust what they use as money. They must be sure that it will exist the next day and the future, and the value will stay with it. Even the slightest doubt that the medium that they use as a currency will not be accepted tomorrow, lose value, or be forbidden or destroyed or anything is enough to render it useless. For this reason, people use the conventional form of money, which today is fiat currency. People trust governments and the state, which manages the fiat currency via central banks. If the people are going to use something else as a currency (even parallel use with fiat currencies), they must be sure that this form of money will exist and keep its value. So, a system is needed that is completely trustless. That means that people are sure (have no doubts) about the new type of currency without the need to trust anyone (individuals, companies, or the state). This can be done with the use of cryptography and decentralization.

But the existence and survival of a coin alone are not guaranteed even with decentralization. The coin must be scarce; else, its value can fall considerably. More generally, if someone has control over the supply (issuance) of the coins, then the people must trust him, which breaks the trust-less logic. So, the publication of the coins must be hardcoded inside the protocol of the system to remain trustless. There is another belief, stemming from Austrian economics (Ludvig von Mises was a famous Austrian economist, whom Satoshi mentions him) that it is okay if there is a cap of the money supply. After Satoshi published his white paper, he was questioned if he could consider creating a mechanism to keep the price stable. Satoshi rejects this as he believes that the value must be adjusted to supply and demand without external intervention:

“Instead of the supply changing to keep the value the same, the supply is predetermined, and the value changes. As the number of users grows, the value per coin increases. It has the potential for a positive feedback loop; as users increase, the value goes up, which could attract more users to take advantage of the increasing value.” – Satoshi Nakamoto, 2009

Again, Satoshi is clear, and his reasoning is sound. The value, which follows supply and demand of the coin, must be a mirror if its usage, which is the real economic value. Satoshi refers to bitcoin, of course, but this reasoning applies to every other native coin of a blockchain.  Additionally, for blockchain that are platforms running smart contracts (for example, Ethereum, Ecochain, and others), the usage of the coin can not only be used as a payment system but also can be used to deploy and run smart contracts.

ECOChain shares the same beliefs with Satoshi. The value of the coin must not be inflated or deflated much from the system or anyone else; the value must be in par with the real value that the blockchain and its ecosystem provides. High usability must drive the price up because the demand will be high. Significant differences in the current price and actual (fair or based on economic) price bring high cyclic deviation, which may be undesirable for investors and users.

For the above reason, the released reward, which is determined by the protocol, should not be very high. The very high release will bring inflation and can drive the current price far from its actual price. It is our responsibility to change consensus (protocol) monetary policy to keep the price always next to the actual economical price (the value that derives from real usage). The only way to do that is to reduce the reward per block considerably.

Someone here can argue that the reward can be set to zero, but this is not financially sound because the coin holders must have a motivation to run a node, keeping the network functional and decentralized. So, a small reward must be present for a very long time. We also decide to set a maximum cap far in the future. After the limit, the coin holders will have an income only from the fees.

For the above reasons, ECOChain needs a hard fork to change the reward system. Also, the method will be changed to halving at each epoch. Finally, we reduce the number of multi-signers to 5. The reason for this is to keep the stake coin transactions smaller because they appear in each block. This will help to reduce the size of chain data, increasing that way the sustainability of the chain in the long run. In the next paragraph, we describe the details of the hard fork.

It would be a hypocrisy form our part (ECOChain team) to just do the hard fork and take no other action. The new cap is only 300 million coins, which will be reached after decades. The original market cap was set to 2 billion. In the initial phase, 200 million coins were pre-mined by the founders of ECOChain. This brings unbalance, is unfair, and threatens price stability. Furthermore, it undermines decentralization because we hold so much staking power.

These 200 million were never intended to be sold in the market or even used as spending fees on the virtual machine. The purpose was purely technical and to strengthen security. The initial pre-mined coins injected a starting entropy in the system. They also secured the chain of 51% attacks from third parties in the initial state. These reasons have been ellipse today. These coins have no basis for existence.

Consequently, very soon after the hard fork, the 200 million will be destroyed (or locked forever). This has the following benefits:

– It brings back staking balance because the coins can’t be used by anyone. So, the actual cap (the final circulation) will be 100 million only. The staking power will be in many hands again, as it proper for decentralization

– It cultivates the feeling of fairness between the community and users

– It brings price stability and removes the fear of inflation; the destroyed coins can’t be used; they can’t be sold. They are out of circulation forever.

– The new reward release speed will be on par with the current fresh circulation. This will make the price depend on real demand, the real economic value that stems from fundamentals(usage).

– Scarcity will help the price to rise slowly. This will attract more investors and funding in the long run.

– Full decentralization is achieved because even the founders will not have more staking power than others.

More details will be released soon from the management team.

For more information or inquiry about ECOChain, please visit: https://ecoc.io/