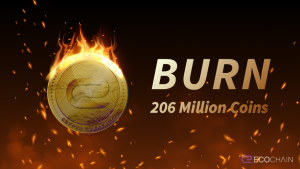 According to the original market cap which set to 2 billion coins, the pre-mined coins exist brings unbalance, unfair, and threatens price stability. Additionally, it undermines decentralization because one entity (ECOCHAIN founders) hold so much staking power. These 200 million coins were never intended to be sold in the market or even used as spending fees on the virtual machine. The purpose was purely technical and to strengthen security.

The 206 million ECOC coins were sent into 2 addresses in smart contract to be locked forever, which are;

How can I check that 206 Million ECOC are unconditionally locked forever?

You must do the following:

A: 200 million coins where pre-mined and the rest were staked. For reason of fairness and staking balance we must destroy them. You can read the white paper for more details. Destroying ECOC is not allowed on protocol level. We had two options: either send them to “zero” address or lock them forever in a smart contract. We decided the latter because it is more transparent and also easier for the users to check.

Q: Can the coins be released in the future?

A: No, it is impossible.

Q: What will happen if I send ECOC to the contract?

A: The coin sent over will be lost forever. Please DO NOT do that as the coin will not be retrievable!

For more question, please email us at support<<@>>ecoc.io