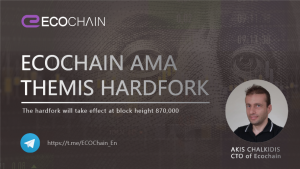 Hello, my name is Akis as a CTO of ECOChain. I am going to make a short presentation of the upcoming Hard Fork. We gave the name “Themis” for Hard Fork It’s actually changing only the PoS rewards system.

The purpose of this Hard Fork is to sanitize the rewards system. Also, Hard Fork will take effect from 870,000 blocks high. The following are the protocol changes that will take effect by coins stake will be reduced to 5 ECOC New max cap is 300 million ECOC Each epoch changes every 1 million blocks (approximately one year) Each epoch the coins stake will be reduced by 1 ECOC until it reaches 1 ECOC. So, each epoch’s coins stake will be 5-4-3-2-1 ECOC After that point the coins stake will be stable at 1 ECOC until it reaches the cap (300 million ECOC) Last rewards block is 47,870,000. After that point, the only reward for Stakers will be the transaction fees. POS Multi-signers are reduced to 5 from 10. The basic reason for this is to reduce future chain data size. And, actually, that’s all about the changes Some common questions you may have:

Ques: What made you decide to so Hard Fork?

Ans: We want to protect investors from inflation, which can lead to a price drop.

Ques: Does a Hard Fork increase the price?

Ans: Well, Possibly. The expectation of tech people changes because the limit cap is much lower now. Also, the tech reward per block is considerably lower.

Ques: What is the benefit of ECOChain?

Ans: After Hard Fork a more stable coin, which is good as economic fundamental. ecocsystem support should not be distracted by external factors (price fluctuation)

Ques: What will happen to the pre-mined coins?

Ques: What is the benefit of supporters?

Ans: The prospect for ECOChain and its ecocsystem will be improved. This benefits everyone involved in ecochain project including supporters.

Ques: What is the final of all this?

Ans: This Hard Fork combined with the destruction of pre-mined coins brings stability fairness and sets the correct expectation for all ECOChain stakeholders (Developer, Investors, Community and anyone involved)

Ques: Do you have a listing plan in Korea?

Ques: As far as I know ECOChain is also researching Oracle Blockchain is the research successful?

Ans: I believe that yes and this Hard Fork is going to help the price defense more.

Lastly, Reminder the expected date is September 15th for Themis, If someone is staking it is good to upgrade his/her wallet before this.